How can a book create a unique experience for not only tourists but locals visiting Canadian cities?

Canada attracts tourists from all corners of the world, making it over a 43 billion dollar industry. However, the smaller cities often get overlooked when people are looking to travel as there are more resources when researching the larger cities. Famous cities like Toronto, Montreal, and Vancouver often get a lot of exposure in the tourism industry. They have been included in various guidebook series such as The Monocle Travel Guide Series or Wallpaper City Guide. Still, the smaller cities rarely get international coverage, which means they miss out on the opportunities to expand and grow their audience.

Creating more resources for other Canadian cities allows a chance for tourism to grow. The Canadian City Guide Series: An Insider's Guide to the City is a concept for travel book series to boost tourism and engagement in cities across Canada. Through in-depth reporting, intelligent analysis, quality yet casual writing, the Canadian City Guide Series provides readers with an insider's guide to any city in Canada.

What makes the Canadian City Series different is that it is written from a local perspective. This series is for tourists visiting Canadian cities and for permanent residence in these cities. It allows everyone to explore and discover new things from a local perspective. The series uses a unique iconography based on what each city has to offer. This gives the explorer a quick look into the city without having to open the book.

My process began with researching the current tourism industry to help guide my work. I found that today, tourists often use google to find their information about a particular place, which leads them to a blog, which can either be run by the city or an individual. These blogs can have tons of great information, but I often found myself getting lost in it.

Once I had a basis for why I wanted to create the series, I researched the competition. The Monocle Travel Guide Series and the Wallpaper City Guide are successful travel guide book series covering over 100 cities worldwide and can be found in many mainstream bookstores. These series are effective because they keep the same tone and style throughout each book, creating an entire cohesive collection that consumers can collect themselves. I noted the type of language used in the book and the categorized content. I could better understand how I wanted to style my series and improve on areas with this information.

A snapshot of my rough sketches as I began to brainstorm ideas for the book and its contents.

A couple rough sketches as I worked through the layout that fit well with the type of book it was going to be.

Process work for the cover of the book.

To make the book stand out from the rest, I choose to have the book written from a local perspective. Therefore, theoretically, each book would have unique authors. This would create an exciting book for tourists visiting from away and for permanent residence in these cities, as they could experience their city from someone else's perspective. Instead of focusing on large corporate chains, the book would feature locally owned businesses throughout each city. Beginning the series with my hometown, Fredericton, New Brunswick. This gave me the insider's perspective I needed. Having experienced what the city offers allowed me to select many things to feature in the book.

The visual design was just as important as the content inside. Every city has something different to offer, whether kayaking on the great lakes or exploring the vibrant nightlife. With each city having so much to offer, I wanted the visual design to communicate this diversity and entice consumers to see more. I decided to create icons for the series because iconography is a visual language recognized and understood immediately worldwide. These icons are already used to help people get around; therefore, using them in a travel guide book series would make sense. Pairing these icons with one colour that is high contrast allows the icons to stand out. The idea is that each book in the series would be assigned its own colour, resulting in a wide range of colours when the series is completed. 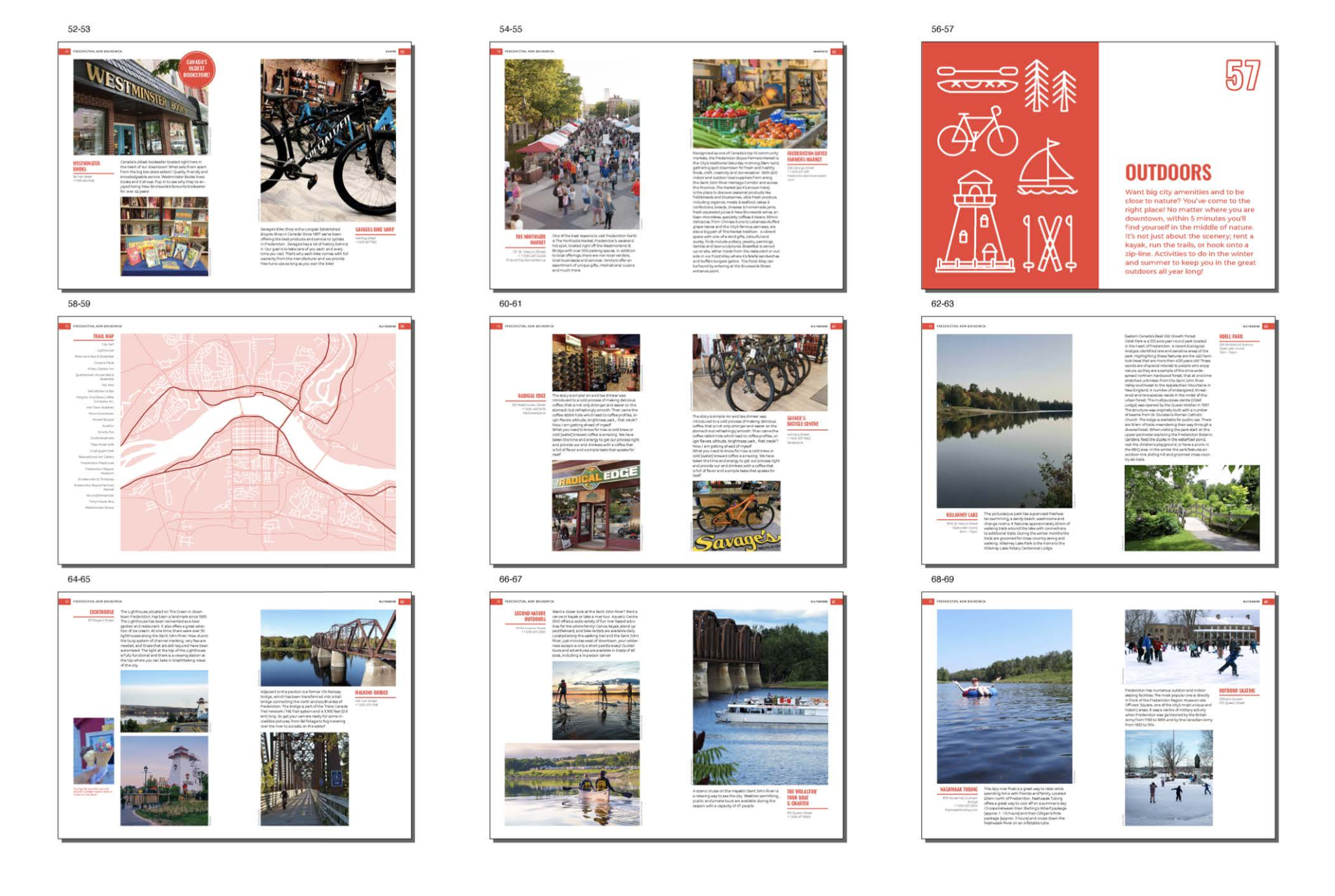 Selection of final thumbnails from the Fredericton, New Brunswick, issue of the Canadian City Series. 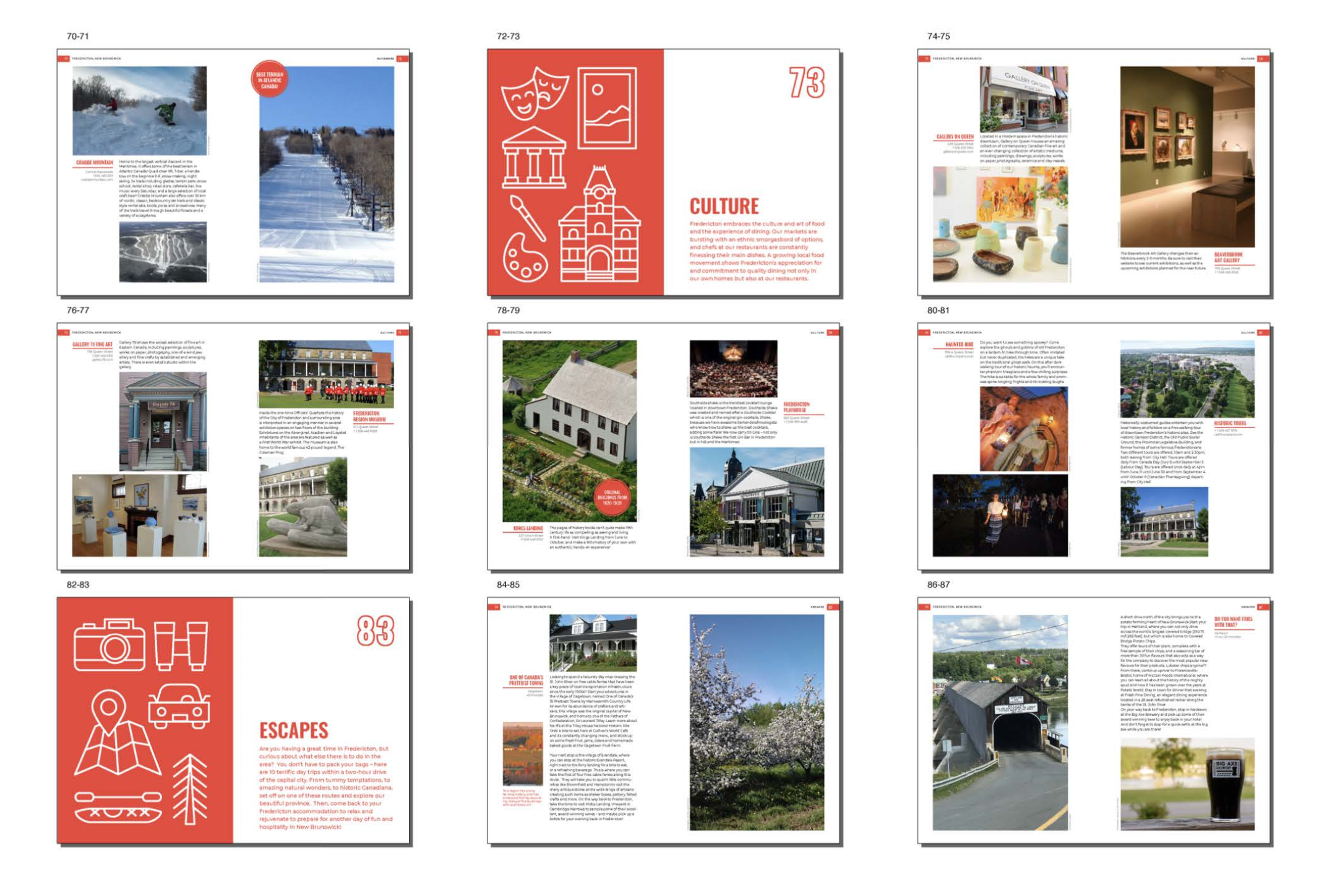 Working on this project, I learned specifically about the practice of book design and all the small essential details it entails. These details are crucial and make all the difference in the final work. I also refined my skills when creating the icons and my writing skills for the mock-up copy. The following steps on this project would be to build out the series, starting with finding authors and creating the content for the book to ensure that it features something for everyone to enjoy. 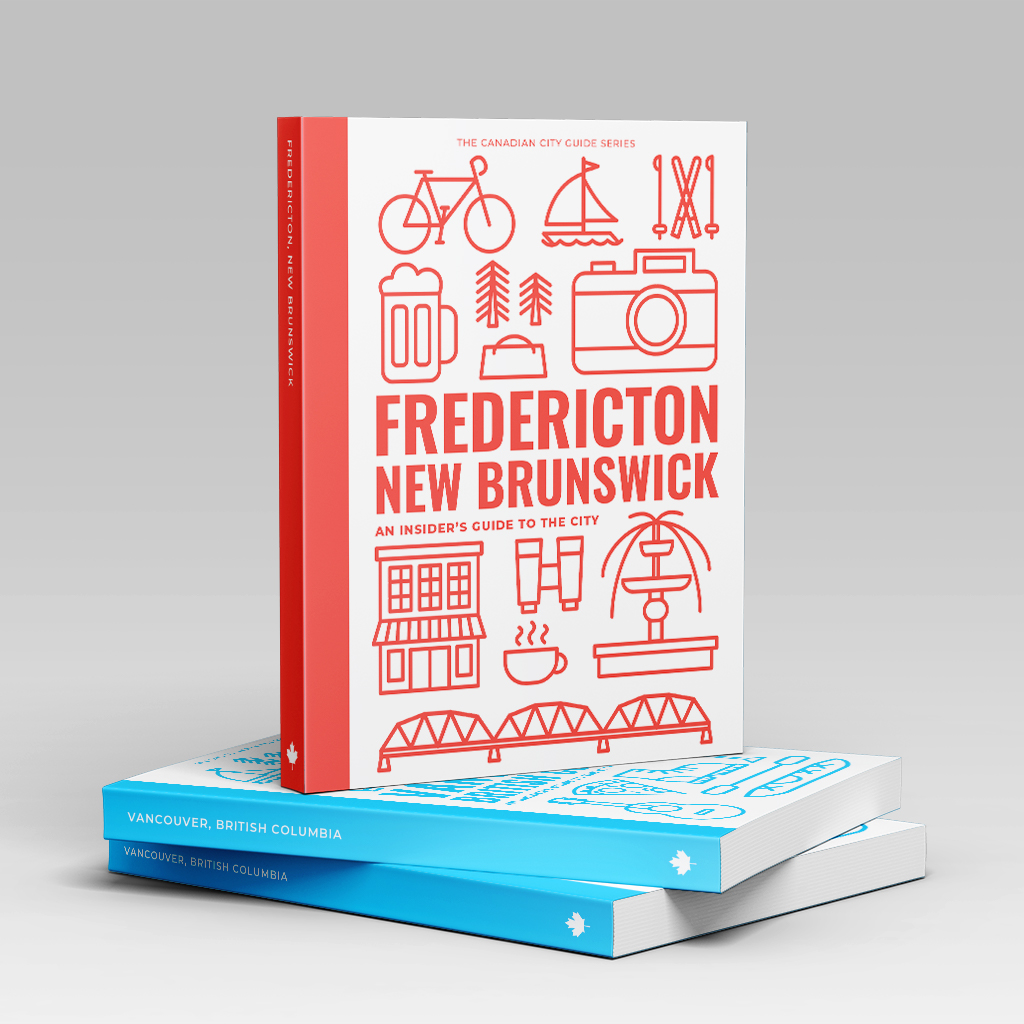 A mockup of the Fredericton, NB issue, as well as, the Vancouver, BC issue. 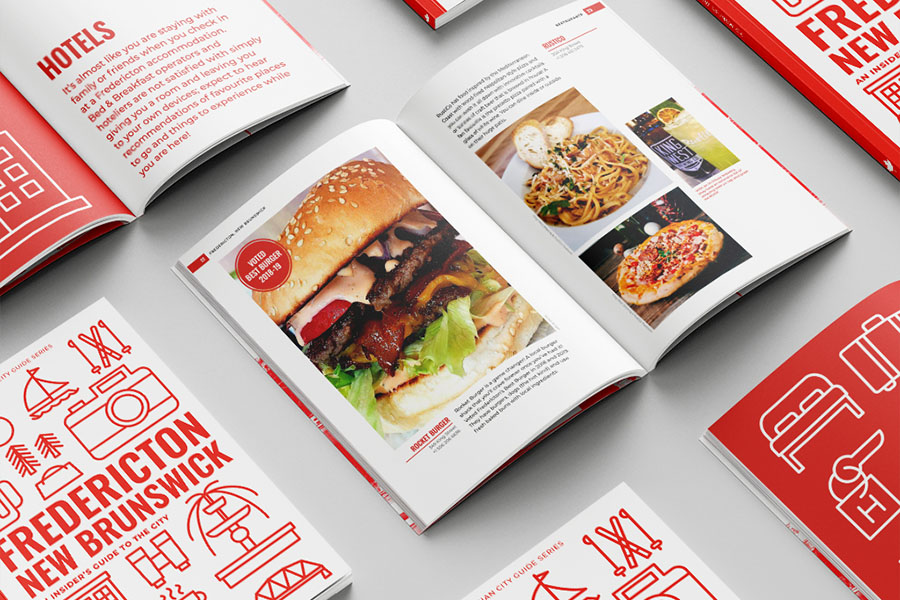 A selected spread from the Food & Drinks section of the Fredericton, NB issue. 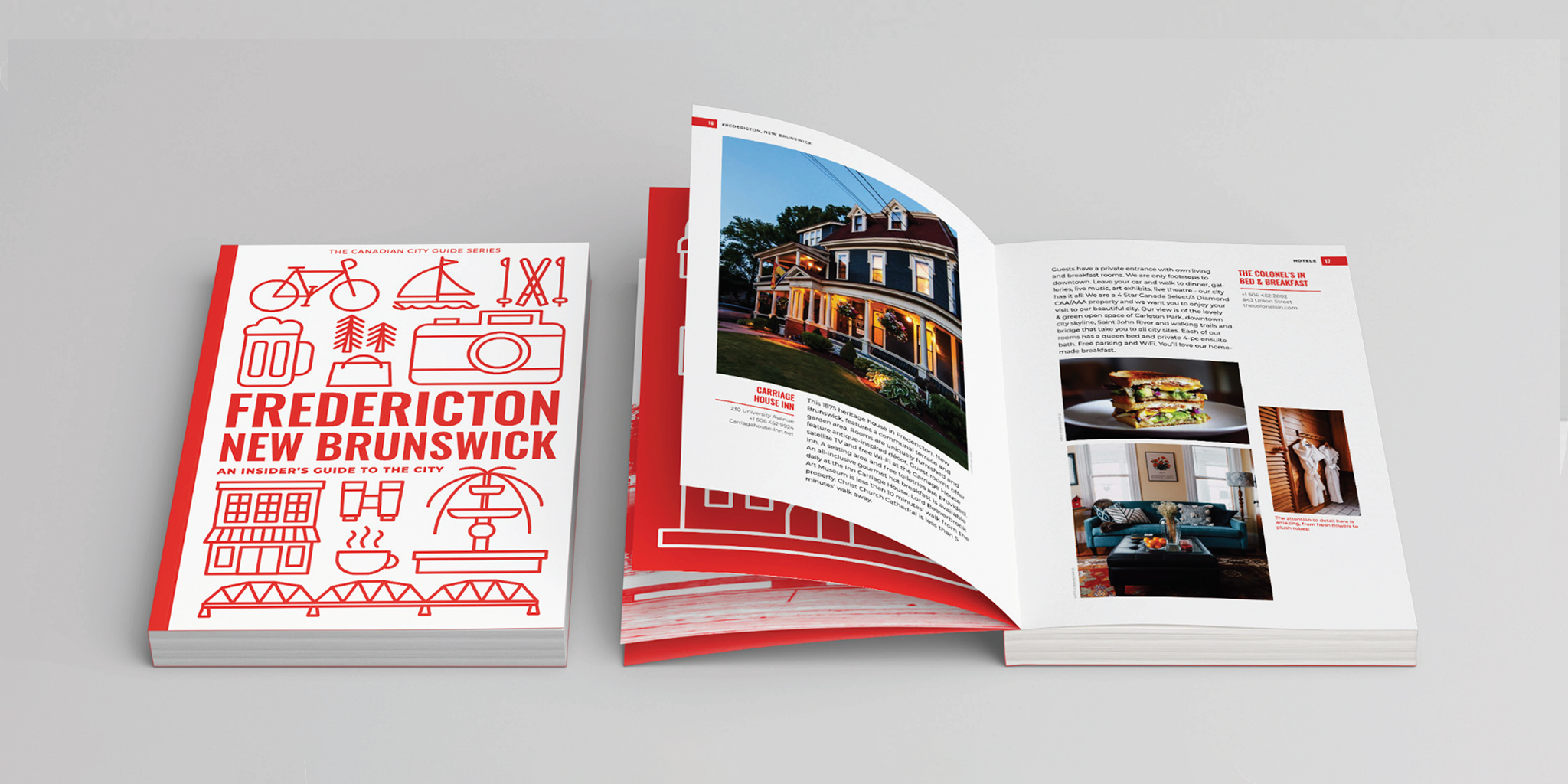 Final mockup of the cover and one inside spread of the Fredericton, NB issue of the Canadian City Series.

Don't be a stranger!

Shoot me an email at britt.leblanc.gm@gmail.com - I'd love to hear from you!
Resume
LinkedIn
Behance
Copyright © 2021 LeBlanc.Design. All rights reserved.